“If we, citizens, do not support our artists, then we sacrifice our imagination on the altar of crude reality and we end up believing in nothing and having worthless dreams.”
– Yann Martel

It gives me a great sense of accomplishment to present this enlightened Royal Endeavors episode, marked by the Monumentalist guided tour of my controversial yet distinguished hometown, Craiova, an exclusive blog post lovingly dedicated to my grandfather, Mugur Iordache, who had recently and graciously stepped into the eternal dimension.

He was a brilliant mathematician and a highly-reputed professor, with a remarkable career which spaned over decades of proudly serving his community by educating many generations of young minds to master the complexity and art of mathematics.

He lead a very respectful, organized life, beat collon cancer for good over thirteen years ago with much pride and courage and never stopped challenging his strength to walk for miles every day in the park until his last one, leading everyone by the power of his example of never giving up.

He was also my greatest Social Media admirer, always dropping encouraging comments while showing off my pics to my grandmother, therefore I strongly feel there is no better ocassion to pay homage to his loving memory than to dedicate the exclusive Monumentalist Craiova fabulous episode to him.

Firstly because there are many misconceptions about my home town, mostly based on violent incidents and bad news in the media, which denigrate its noble and rich intellectual history and elegant architectural legacy. Unfortunately, ordinary people who feed on such news may have no idea about the important landmarks the 6th largest city of Romania prides itself with.

There are countless historical and cultural sites in Craiova that can keep the traveler intrigued therefore my goal is to surprise my audience and lastingly impress it with some of the most somptuous edifices worthy of its time and attention, landmarks which I had the absolute pleasure of visiting during the Monumentalist Tour.

This eclectic journey would not have been possible without the initiative of AIO living and the brilliant guidance of Alexandru Buzatu, my former high school colleague, brilliant architect and devoted guide and of course, the Monumentalist movement.

Let’s now proceed with the discovery of the wonderful Craiova city. 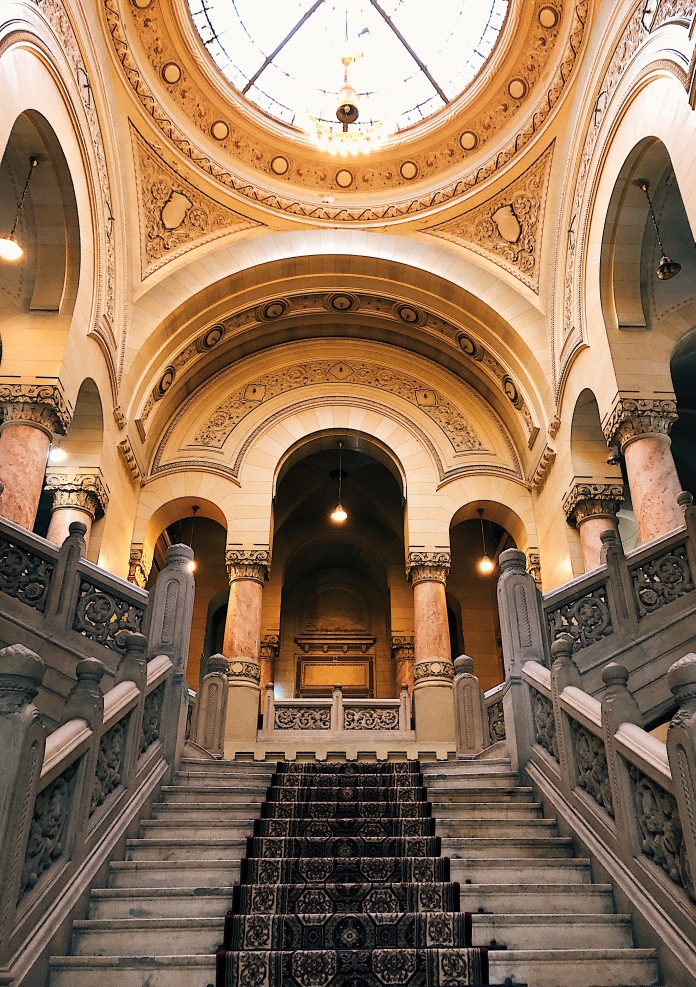 “We shape our buildings; thereafter they shape us.”
– Winston S Churchill

The Administrative Palace of Craiova is definitely one of its emblematic landmarks.
Built in the first part of the 20th century according to the plans of architect Petre Antonescu, in the neo-romanian style strongly promoted by Ion Mincu, the edifice now hosts two of the most important institutions of the county: The Prefecture and Dolj County Council.

The Prefecture Palace was most likely built between 1912-1913, as this information differs according to various sources (from 1907 to 1912). It is said prime minister Ion I. C. Bratianu, while attending the liberal meeting of 24 June 1909 in Craiova, was also present at the ceremonial act of laying the foundation. For its impressive construction on the former generous land of Hagiade family and the development of its front square, the tales of time attest a whole neighbourhood of hovels had to be demolished.
The constructor contracted by Antonescu for the rising of the Administrative Palace was the famous Giovanni Battista Peressutti, a good friend of the architect who had timely moved to Craiova in 1908, one year before the Administrative Palace was designed.

Aesthetically speaking, the façade decorations impress through a variety of original elements, which elegantly reinterpret specific details of old Romanian architecture, such as the roof marked by its green glazed tiles wrapper with zinc boards and skylight decorative elements, the loggias, balconies and bay windows on the storey façade, as well as the side pannels, the trilobate springs and platbands of the windows, the columns, the friezes, the stone pedestal and also the drain pipes for rain water, moulded with twisted rope model.

The attraction felt by architect Petre Antonescu for traditional architecture is highly notable in the design and treatment of the Administrative Palace interior, whose central piece is the great Honor Ladder, which offers direct access to the reception rooms, the board room and the main offices of the institutions hosted by the imposing edifice.
The skylight in the ceiling, masterfully arranged above the Honor Ladder, is also remarkable for its aesthetical value and for the purpose of casting natural light over the halls of the palace. 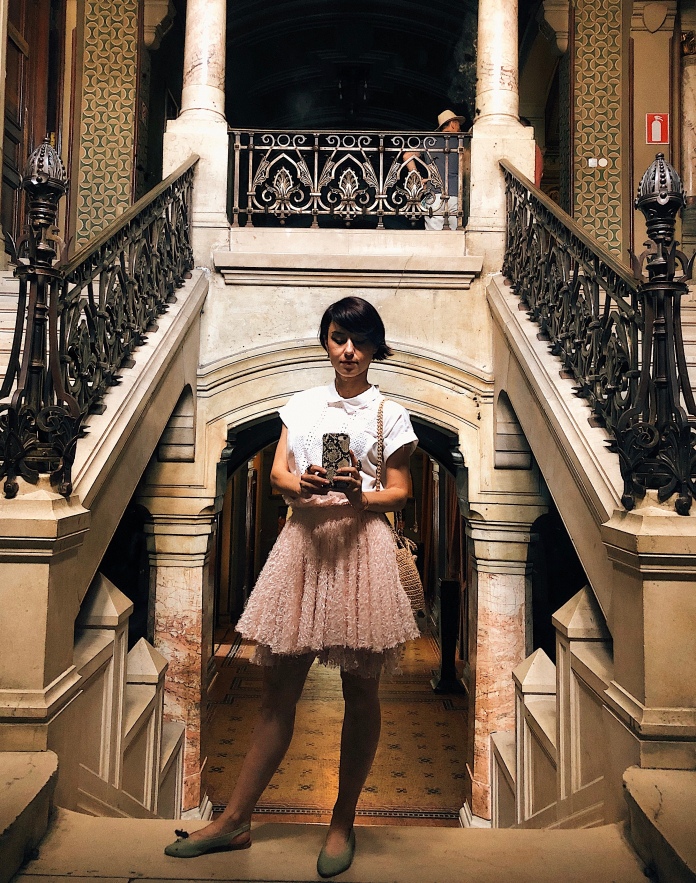 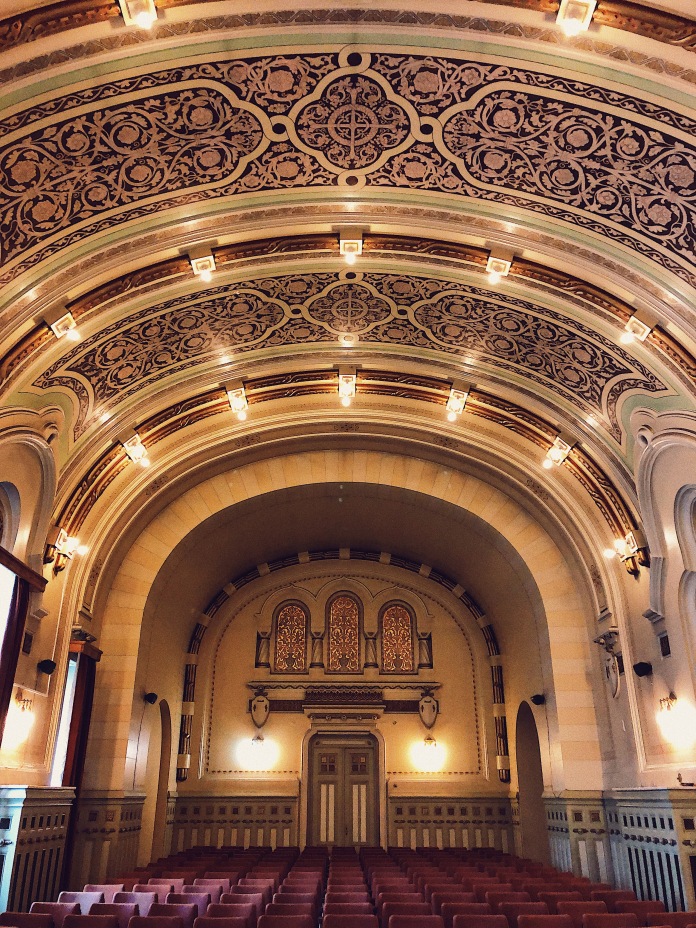 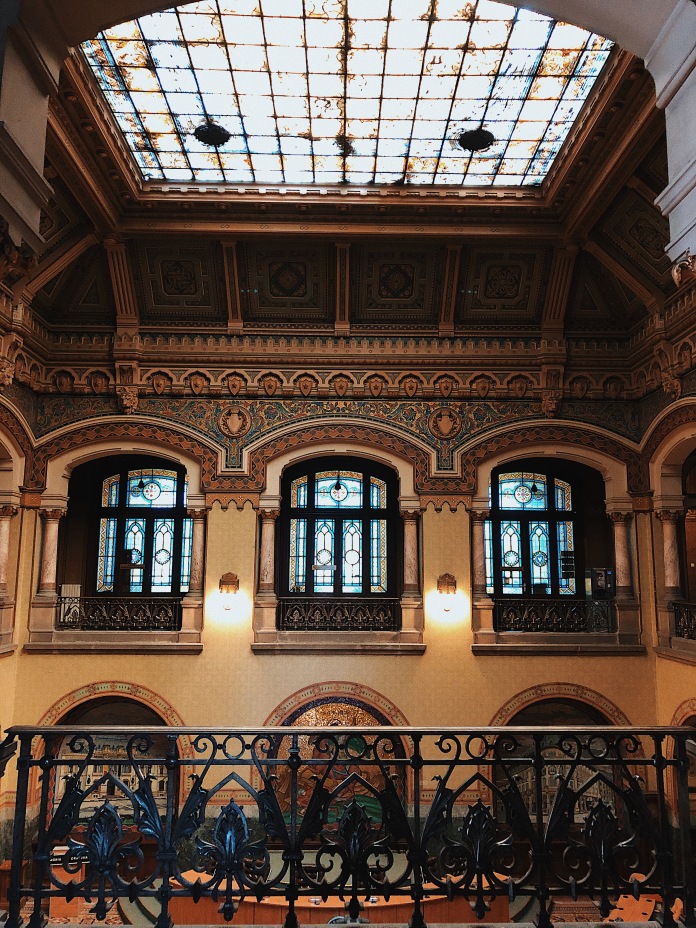 “Architecture is a social act and the material theater of human activity.”
– Spiro Kostof

In 1906, the most arduous promoter of neo-romanian architectural style, the architect Ion Mincu, had designed the project for The Bank of Commerce Palace in Craiova, the monumental building which hosts the City Hall since 1989. His untimely death in the winter of 1912 had interfered with the construction work, which was finalized between 1912-1916, under the surveillance of architect Constantin Iotzu.
The famous constructor Giovanni Battista Peressutti was employed to proceed with the finalization of the masterpiece, who had already contributed successfully to the construction of the Administrative Palace, later being involved in other outstanding monumental buildings, such as the White House of Craiova, The Carianopol House – which now hosts The Gendarmerie Commandment of Dolj, The Agronomy University, the Polyclinic 2 of Filantropia Hospital, the reconstruction of Carol I National College after the massive fire of 1930, the Performance Hall of The Lyrical Theatre, Barbu Drugă house and mill, Constantin Neamțu house and many more.
The palace impresses through its eclectic architectural style marked by distinguished neo-romanian elements and the richly decorated interiors, adorned with stucco, stained glass details, Venetian mosaics and masterful wrought iron artwork. 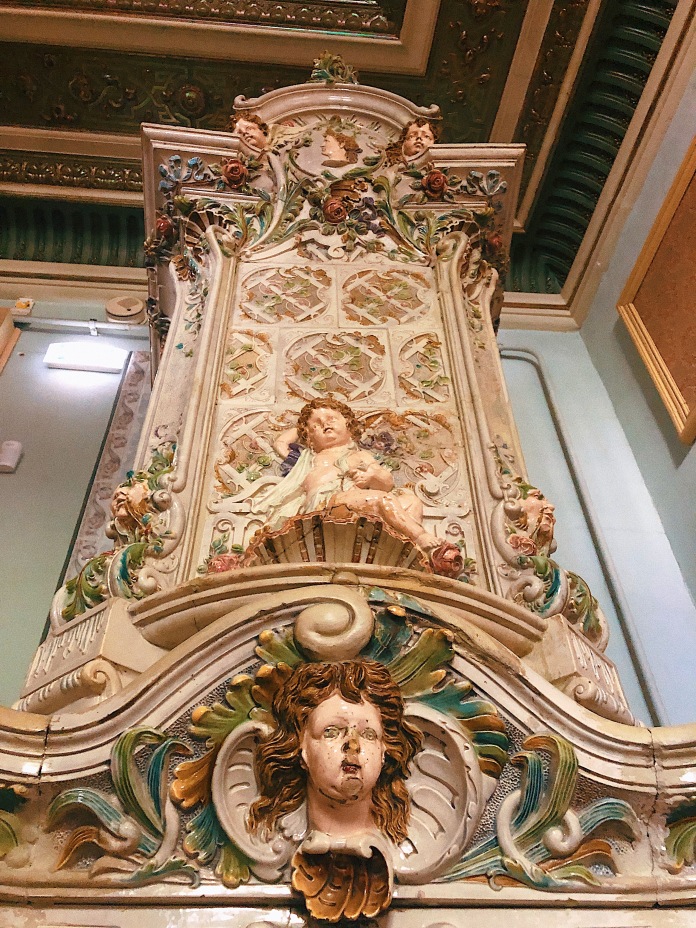 “The greatest products of architecture are less the works of individuals than of society; rather the offspring of a nation’s effort, than the inspired flash of a man of genius…”
– Victor Hugo

Nicolae Romanescu House is an architectural masterpiece of national interest, a representative landmark which once belonged to Romanescu family, named after Nicolae Romanescu (counselor, mayor of Craiova, deputy and senator for 48 years), also famous for the establishment of Nicolae Romanescu Park, the largest natural park in Eastern Europe, whose plans, designed by french landscape architect Edouard Redont, won the Gold medal at the Exposition Universelle in 1900.
Romanescu House is known today as The University House since 1974, hosting scientific and cultural activities organized by the professors of the University of Craiova.

An occidental, modern and visionary spirit, Nicolae Romanescu was the personality who had influenced the face of Craiova in the most spectacular way. His modernization projects featured radical initiatives such as water supply, canalization, environmental protection, electrification, public lightening, urban pavement, alignment and modernization, the arrangement of green spaces around schools and churches, the central square foundation, commercial and industrial development and cultural and educational improvement.
His most romantic idea was the transformation of Bibescu gardens into the monumental natural park that carries his name today.

According to Elvira-Ecaterina Ivănescu in “Casa Romanescu” volume, Romanescu residence went through an improvement process between 1890-1892, before Nicolae married Lucia Fălcoianu.
At that time, Romanescu decorated the house following the plans of an austriac architect, covering the walls in Lyon silk, bringing famous foreign artists to paint the panelling, the doors and the ceilings (danish painter Friedrich Kraul), furnishing the luxurious interiors with splendid ceramic stoves, mirrors, courtains and cabinets brought from Vienna, while the newly sumptuous façade from Calea Unirii received a venetian red subtone chromatic upgrade as well.
After his marriage to Lucia in 1894, the house was electrified and the gas lamps were replaced by golden bronze chandeliers.
It is certified that Queen Elisabeth had also been present on various ocassions at the frequent ladies meetings in Craiova organized by Lucia Romanescu in the magnificent Nicolae Romanescu house.
Other famous guests hosted by Romanescu family were Alexandru Macedonski, landscape architect Edouard Redont, Nicolae Iorga, George Enescu, tenor Grigore Gabrielescu, Barbu Ștefănescu Delavrancea, Ion I. C. Brătianu, Take Ionescu, Elena Văcărescu.
At the end of the XIX century, the house had become an extravagant art gallery.
A dedicated collector and book lover, Romanescu had gathered a valuable collection, which included paintings, graphics, sculptures, porcelains, fabrics, tapestry, furniture and books, occidental and romanian art.
Romanescu family organized several expositions at Minerva Hotel, Carol I highschool and Craiova City Hall with the purpose of collecting funds for the town’s modernization public works. 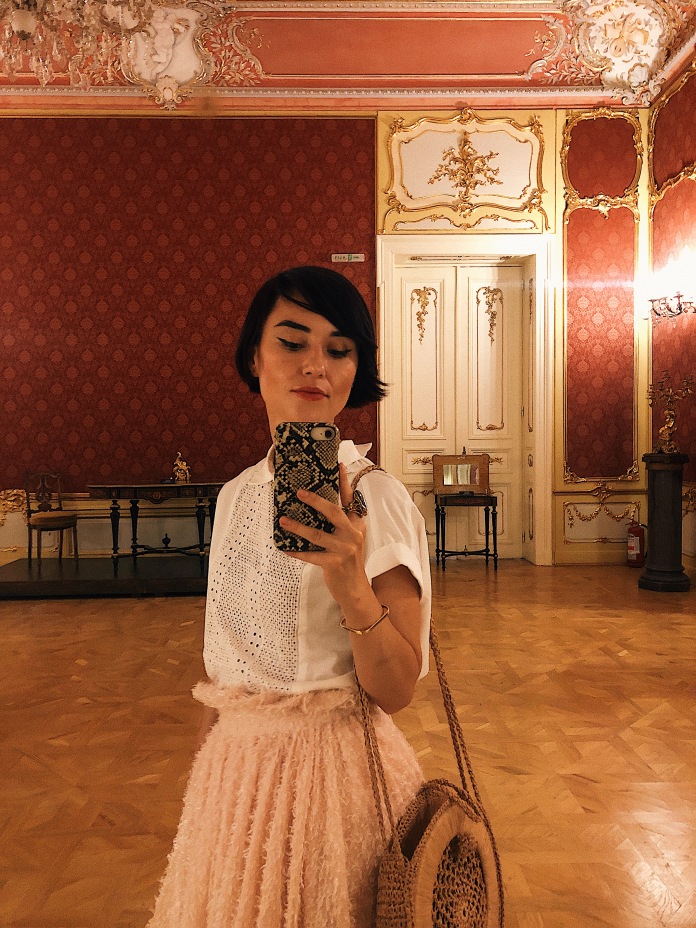 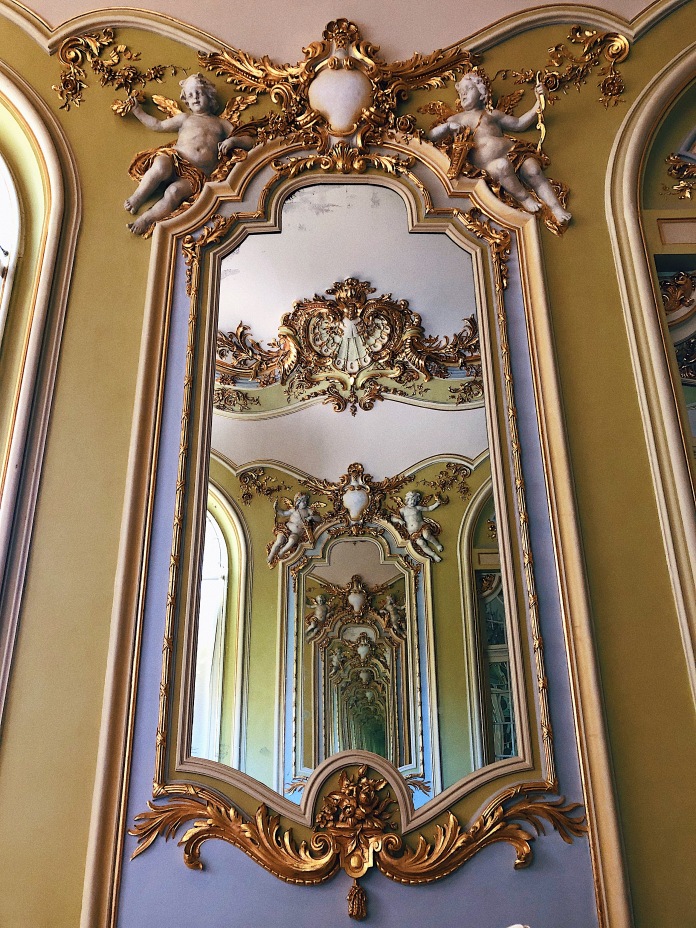 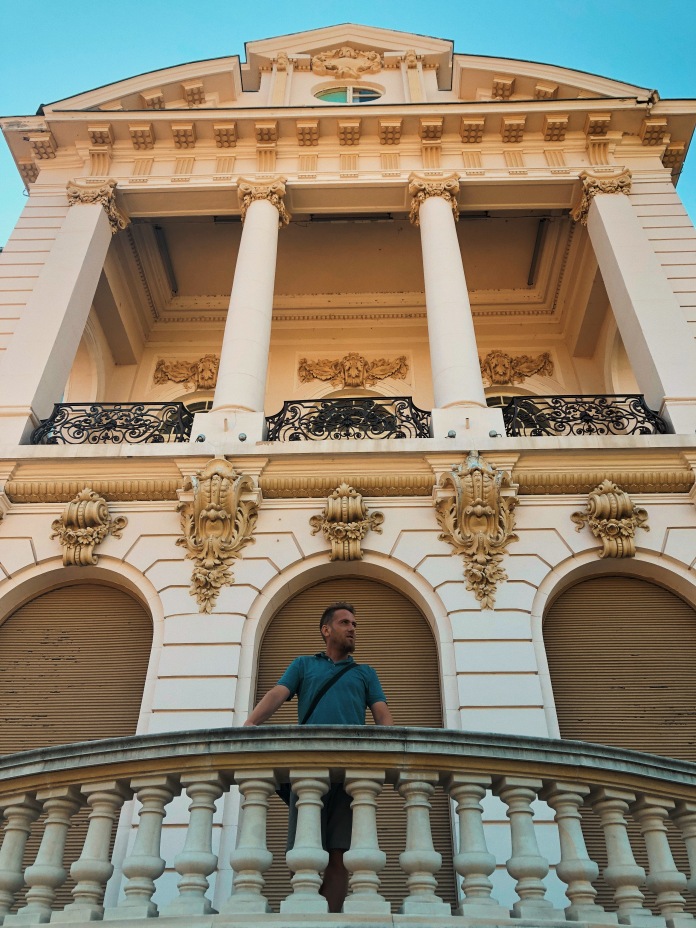 “A great building must begin with the immeasurable, must go through measurable means when it is being designed, and in the end must be unmeasured.”
– Louis Kahn

The Craiova Art Museum is housed in the Constantin Mihail Palace since 1954.
The palace once belonged to Constantin Dinu Mihail (1837–1908), the second richest man in Romania at that time after prime minister George Gr. Cantacuzino and it is also known as Jean Mihail Palace.
The sumptuous neobaroque palace was completed in 1896, following the plans of the French architect Paul Gotereau, who also built the CEC building in Bucharest.
The legend says Mihail was so rich that he went to King Carol I to ask for permission to cover the palace in gold coins but the king would only grant his wish if he placed the coins in edges, which would have left a small portion of the palace uncovered.
The palace is decorated with Carrara marble stairs, Lyon silk walls, Murano glass chandeliers, painted ceilings, partly gilded stucco, and Venetian mirrors.
The palace is listed as a historic monument by Romania’s Ministry of Culture and Religious Affairs.
The main attraction of the museum, is the art gallery dedicated to Romanian-born Constantin Brancusi, exhibiting six of his early sculptures (including variants of his best-known works): The Kiss (1907), Vitellius (1898), Woman Torso (1909), The Vainglory (1905), Boy’s Head (1906), Miss Pogany (1902). Brancusi’s ‘studio’ has been recreated in the museum.
It also features a variety of paintings by important Romanian masters such as Theodor Aman, Nicolae Grigorescu, Vasile Popescu, Ștefan Luchian, and Theodor Pallady, together with some Romanian icons.

“When the old way of seeing was displaced, a hollowness came into architecture. Our buildings show a constant effort to fill that void, to recapture that sense of life which was once to be found in any house or shed. Yet the sense of place is not to be recovered through any attitude, device, or style, but through the principles of pattern, spirit, and context.”
– Jonathan Hale

I hope you had fully grasped the fabulous tales of Craiova and its luxurious, majestic landmarks, just as much as I had enjoyed the fabulous tour provided by The Monumentalist and AIO Living.
I will be back shortly to document the surprise afterparty after this special event, more casual but equally delightful, a feast held at an old mansion in a charming atmosphere, which will definitely be a sight of sore eyes.
Stay tuned, my lovelies! 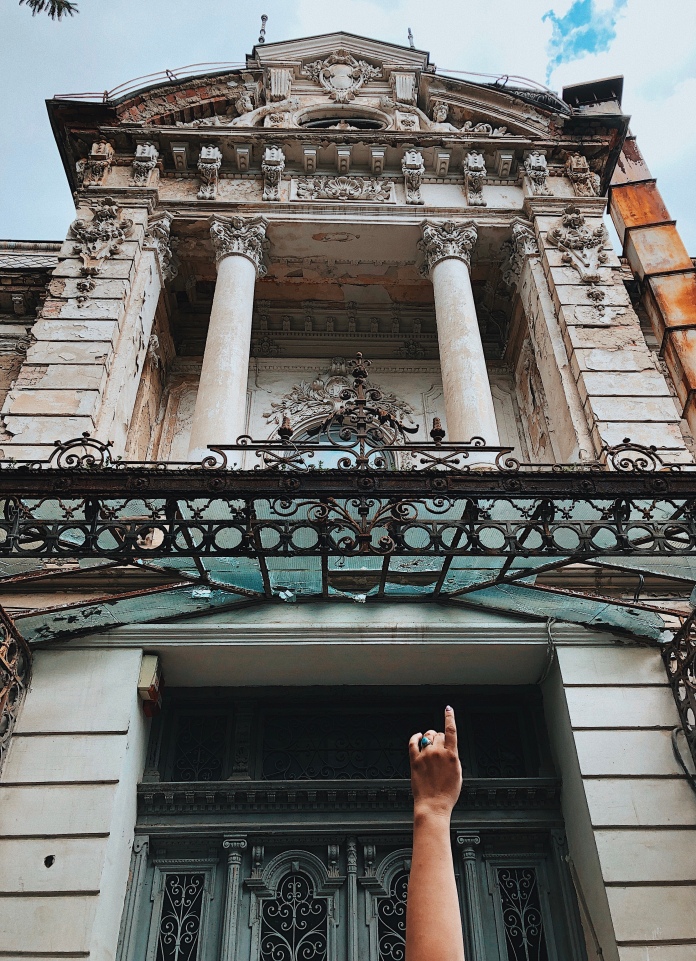