Welcome back to the much expected but less anticipated Royal Endeavors eclectic episode which marks the beginning of the fabulous birthday adventures I recently had in Spain and Basque Country, by starting with a visit at the breathtaking Cathedral of Saint Mary of Burgos.

First I would like to mention this trip is featured and available in the Senior Voyage offer proposals of Christian Tour, one of the most appreciated travel agencies in Romania and the one in charge of most of the cultural trips I had taken with my parents, which we had very much enjoyed.

The greatest thing about these trips, except the destination, are the well-prepared and considerate guides, armed with impressive knowledge, patience and flawless people skills, the optional daily organized trips, which can be quite fast-paced, sometimes exhausting but incredibly rich in cultural and religious tourist attractions and the senior tourists accompanying us, which are absolutely delightful, to my opinion – witty, mannered and high spirited, just as I wish some people of my age would be. Honestly, I always prefer to be surrounded by younger or elder people I have much to learn from.

After waking up at 4 in the morning on the day of the departure, which was not my greatest pleasure (neither 7 or 8 is), we arrived with a Tarom flight to Madrid, where a brand new and fully equipped Christian Tour travel bus was waiting to take us to Comillas, a lovely municipality in Cantabria, northern Spain, set to be our residential town for the next seven days. We were part of an ideal group of 17 people, accommodated in a 54 seats bus so just imagine the discretion, space and comfort each of us had plus time to get to know each other.

With these being said, I will dedicate an exclusive Royal Endeavors blog post to the wonderful Comillas separately, as it hosts several architectural marvels, including one of the few villas designed by Antoni Gaudí outside of Catalonia – the exquisite El Capricho – spacious, intimate and delightful, an exquisite summer residence adorned with the Sun Flower symbol. Stay tuned for more!

Before going any further, deep diving into the historical background of Catedral de Burgos – the first gothic cathedral of the Peninsula – I would like to point out the outstanding psychological factor of seeing such a majestic ornamented interior has on my personal state of being. This is simply a personal experience based on keen observation, combined with a little bit of self-awareness, sprinkled over the refinement of my tastes through time.

I do understand other architectural currents such as minimalism but they are not really my cup of tea. Speaking about tea, the fact that I adore a smokey black African one gives a great suggestion on my preference for any art form which is oppulent, highly decorated, heavy in details, bursting with symbolism and myth in front of my very eyes. This heavy art with a twist of myth and magic is what truly energizes me, especially on my arrival in Spain, after a too early morning start and quite a long journey – not the big empty spaces in fancy “greige” (grey+beige) marble shades but the Gothic, Baroque and Renaissance styles intertwined to shine light upon this  reigning beauty of Castile and León, the impressive Metropolitan cathedral of Burgos, groundbreaking in 1221.

Built over more than four centuries, the Cathedral bears testimony to the creative genius of architects, sculptors, and craftsmen throughout these periods.

The monument is an extraordinary summary of European Gothic influences, which can be admired in every component of the structure, from the facades and chapels to the stained glass windows and sculptures and contains all key attributes to express its Outstanding Universal Value, having been declared a UNESCO World Heritage Site in 1984.

Prices may vary from 7€ for an individual to 6€ per person for a group larger than 15 people; 4,50€ for students not older than 28 years, pelegrins, members of numerous families and unemployed and 2€ for children aged between 7 and 14 years old and handicaped people. All prices include audioguides.

According to the UNESCO World Heritage Centre Official Site, Our Lady of Burgos was begun in the 13th century at the same time as the great cathedrals of the Ile-de-France and was completed in the 15th and 16th centuries. It is a comprehensive example of the evolution of Gothic style, with the entire history of Gothic art exhibited in its superb architecture and unique collection of art, including paintings, choir stalls, reredos, tombs, and stained-glass windows.

The plan of the Cathedral is based on a Latin Cross of harmonious proportions of 84 by 59 metres. The three-story elevation, the vaulting, and the tracery of the windows are closely related to contemporary models of the north of France. The portals of the transept (the Puerta del Sarmental to the south and the Puerta de la Coronería to the north) may also be compared to the great sculpted ensembles of the French royal domain, while the enamelled, brass tomb of Bishop Mauricio resembles the so-called Limoges goldsmith work. Undertaken after the Cathedral, the two-storied cloister, which was completed towards 1280, still fits within the framework of the French high Gothic.

After a hiatus of nearly 200 years, work resumed on the Burgos Cathedral towards the middle of the 15th century and continued for more than 100 years. The work done during this time consisted of embellishments of great splendour, assuring the Cathedral’s continued world-renown status. The workshop was composed of an international team, and among the most famous architects were Juan de Colonia, soon relieved by his son Simon (responsible for the towers and open spires of the facade, the Constable’s chapel, and the Saint Anne’s chapel) and Felipe de Borgoña, assisted by numerous collaborators (responsible for the choir, cupola, and lantern tower over the transept crossing).

When two of these architects, Juan de Vallejo and Juan de Castañeda, completed the prodigious cupola with its starred vaulting in 1567, the Burgos Cathedral unified one of the greatest known concentrations of late Gothic masterpieces: the Puerta de la Pellejería (1516) of Francisco de Colonia, the ornamental grill and choir stalls, the grill of the chapel of the Presentation (1519), the retable of Gil de Siloe in the Constable’s chapel, the retable of Gil de Siloe and Diego de la Cruz in Saint Anne’s chapel, the staircase of Diego de Siloe in the north transept arm (1519), the tombs of Bishop Alonso de Cartagena, Bishop Alonso Luis Osorio de Acuña, the Abbot Juan Ortega de Velasco, the Constable Pedro Hernández de Velasco and, his wife Doña Mencía de Mendoza, etc.

Thereafter, the cathedral continued to be a monument favoured by the arts: the Renaissance retable of the Capilla Mayor by Rodrigo and Martin de la Haya, Domingo de Berriz, and Juan de Anchieta (1562-1580), the tomb of Enrique de Peralta y Cardenas in the chapel of Saint Mary, the chapel of Santa Tecla, and the “trascoro” of the 18th century.

Burgos Cathedral has exerted, at different times throughout history, a considerable influence on the evolution of architecture and the arts. The Cathedral played an important role in the diffusion of the forms of 13th-century, French Gothic art in Spain. The internationally important Cathedral’s workshop in the 15th and 16th centuries, where artists from the Rhineland, Burgundy, and Flanders trained Spanish architects and sculptors, created one of the most flourishing schools at the end of the Middle Ages. The Cathedral’s also served as a model throughout the 19th century, i.e. the French architect Garnier was inspired by the staircase of Diego de Siloe when he created that of the Opera in Paris.

Burgos Cathedral, with the tomb of El Cid and his wife Doña Jimena, is intimately linked to the history of the Reconquista and Spanish unity. Several members of the early royal house of Castile rest beneath the main altar. The memory of Saint Ferdinand is linked to the construction of this symbolic monument of the Spanish monarchy.

Regular works of maintenance have helped to sustain the material integrity of the monument. There are no negative effects from urban development, since it is legally protected at the highest level of Spanish law, with every action strictly controlled to preserve the Outstanding Universal Value of the property.

The Burgos Cathedral retains all the key features of authenticity in respect to location, materials, form, and design.

Over time, continuous maintenance works have taken place under control and supervision of the Administration Departments in charge of protection and conservation of Cultural Heritage. The basis for these interventions is set out in the Director Plan.

In respect to urban planning, a Special Plan for the Protection of the Historic City includes all the monumental surroundings of the Cathedral, which also overlaps with the surroundings of the Route of Santiago de Compostela. The Special Plan sets out the regulations for this area, with strict guidelines for general, urban development and for the uses of buildings in this area.

These being said, I am confident you will enjoy an excellent visit at this Gothic masterpiece jewelry of Spain, contemplating its prestigious contribution to the World Cultural Heritage and saving a generous space inside your souls for the sacredness of religious art, which never ceases to fascinate me personally. The legacy offered by Burgos’ Saint Mary Cathedral prodigious artists will lasts for centuries to fascinate the spirits, soothe the eyes and feed the souls so take your time and enjoy its lovely glow. 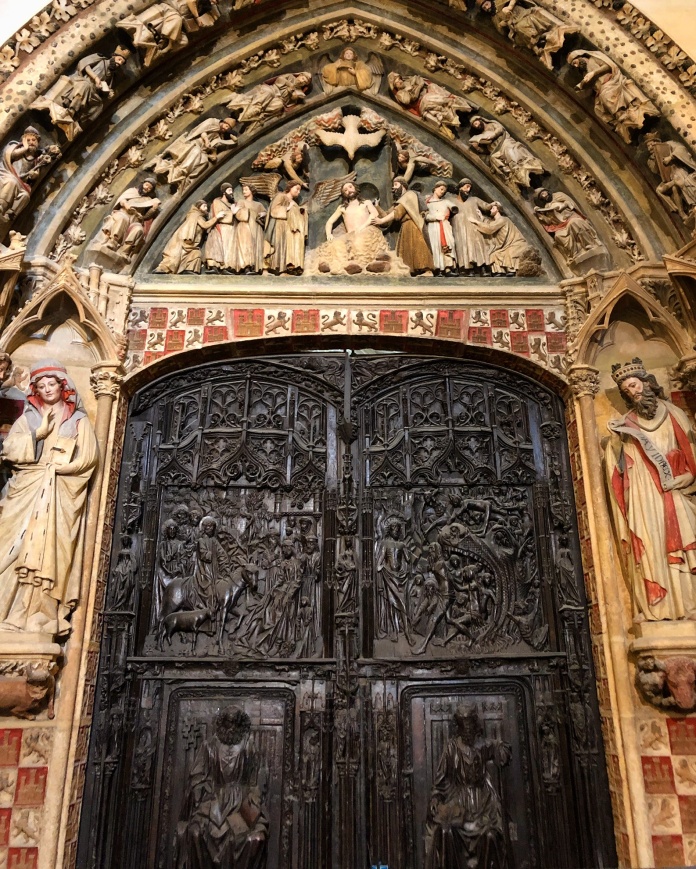 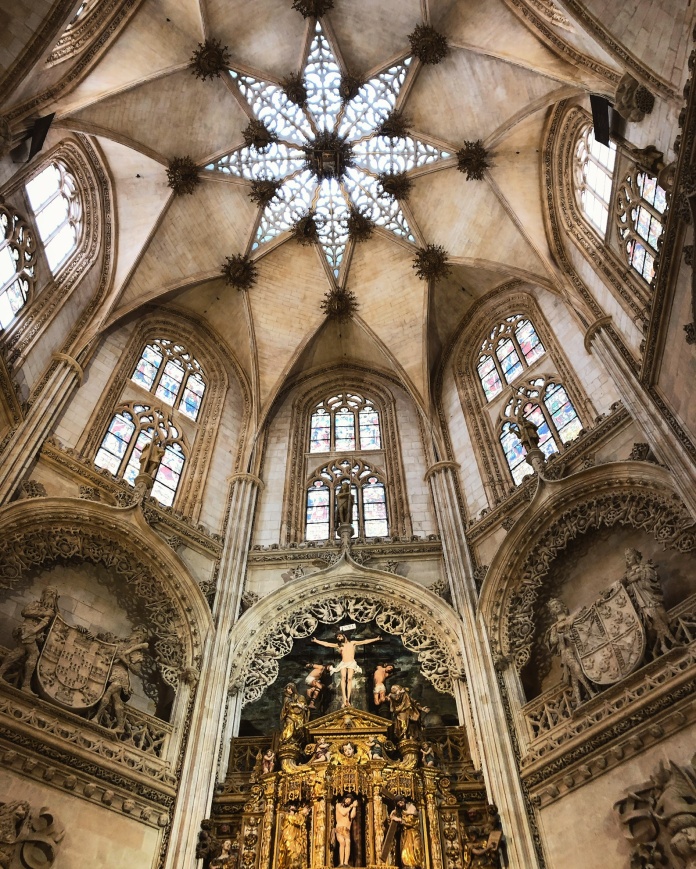 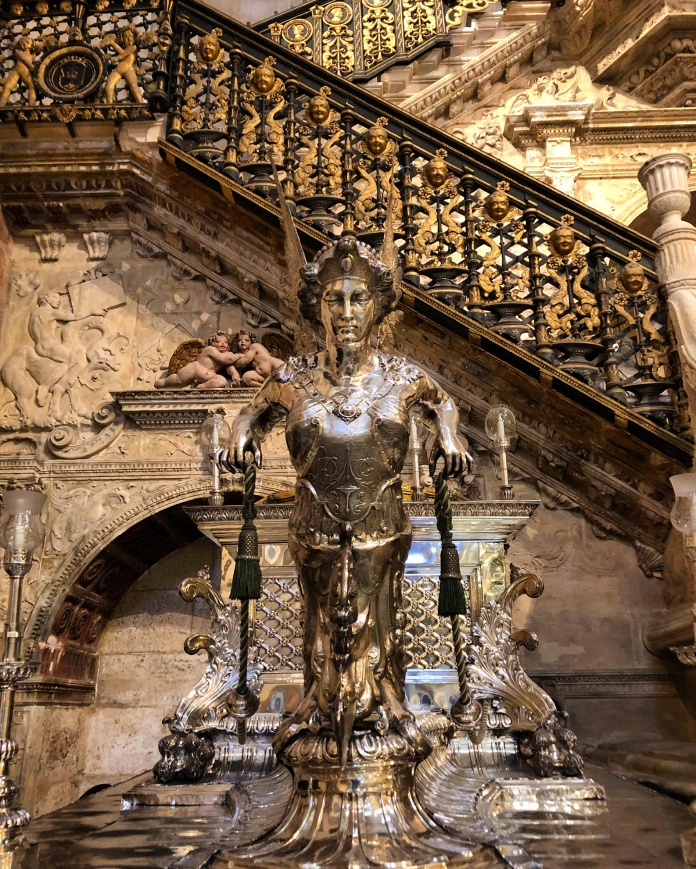 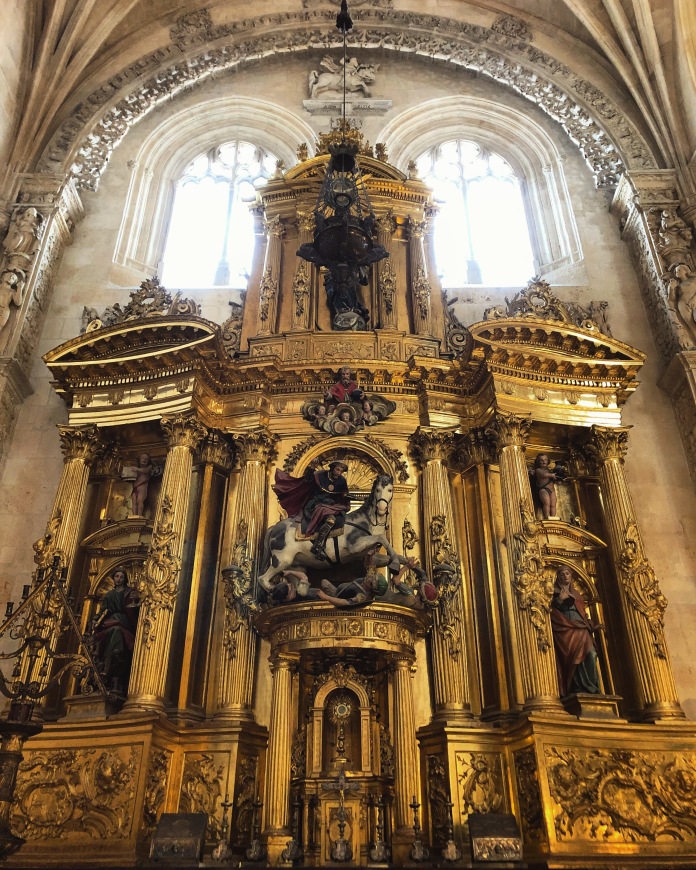 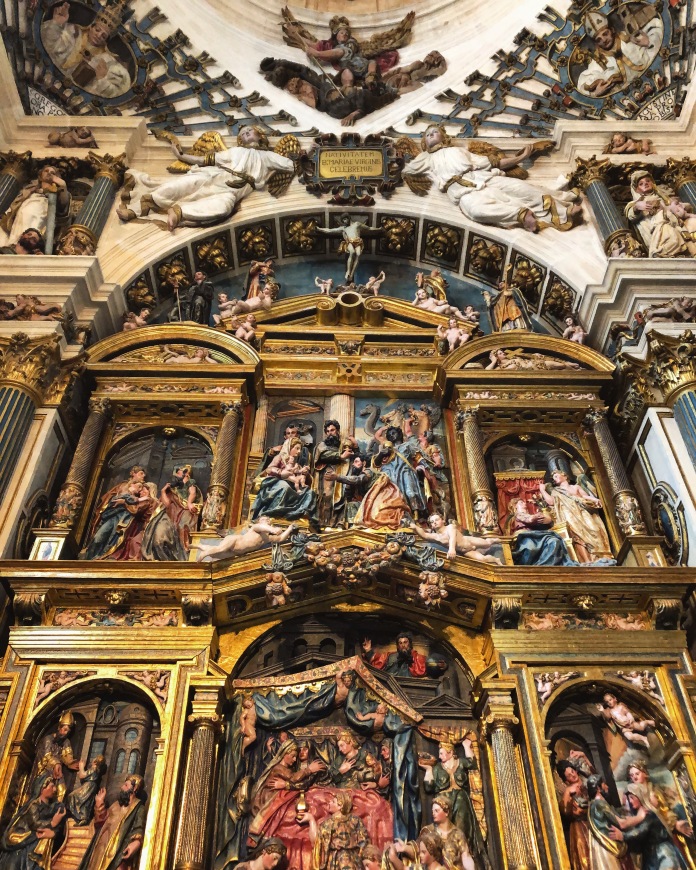 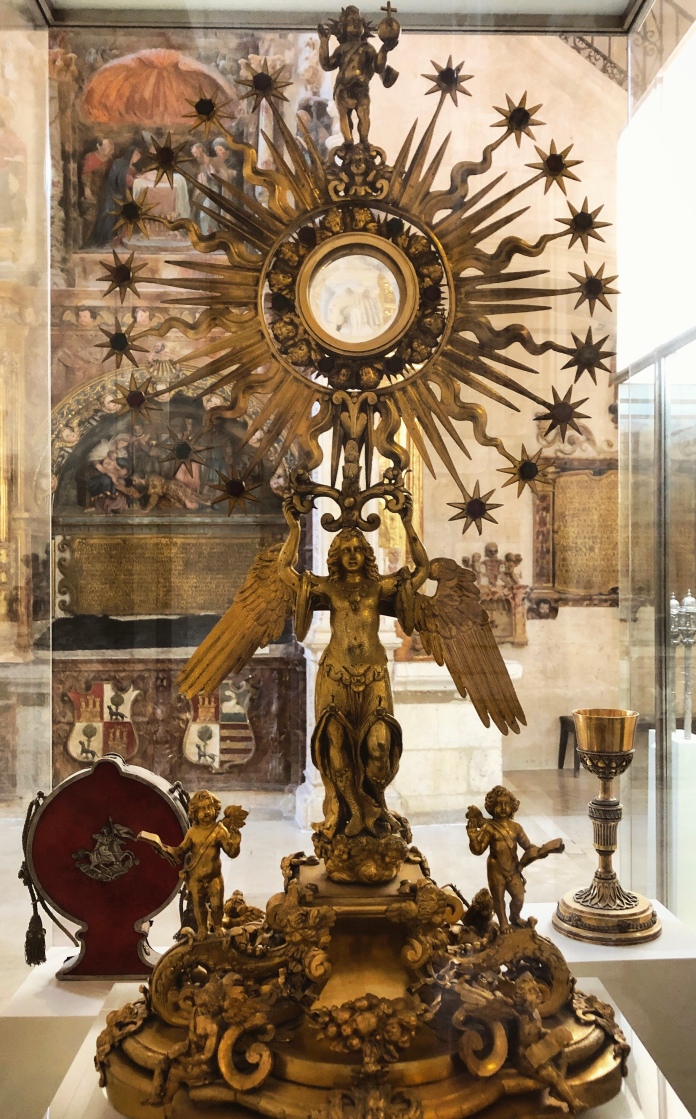