“I’ve seen you, beauty, and you belong to me now, whoever you are waiting for and if I never see you again, I thought. You belong to me and all Paris belongs to me and I belong to this notebook and this pencil.”
– Ernest Hemingway

Following my Royal Path into the coeur of the City of Love, I have decided to enchant you with a distinguished and versatile selection of three incredible locations which I wholeheartedly recommend to visit while you’re on vacation in my favorite city in the whole wide world ever since my first trip at 11 years old, which I have been visiting yearly and dearly for the past 5 years.
It will probably come to you as a total surprise I haven’t seen these luxurious places before, therefore I am more than flattered to share my precious experience with you, which aims to provoke and inspire you to follow my lead deep down into the Heart of the City of Romance.

No matter the weather, keep it in your mind there will always be something absolutely mesmerizing about Paris to surprise you, whether you’re in for a little treat (I mean trip) or you’re a well established resident of this global center for art, fashion, gastronomy and culture.

“Whoever does not visit Paris regularly will never really be elegant.”
– Honoré de Balzac

“Without elegance of the heart, there is no elegance.”
– Yves Saint-Laurent

Musée Yves Saint Laurent Paris, inaugurated on 3 October 2017, is the first museum dedicated to the work of one of the twentieth century’s greatest couturiers to open in the capital of fashion. It exhibits the couturier’s body of work on the legendary premises of his former haute couture house, alternating between retrospective displays and temporary thematic exhibitions.
It is housed in a Second Empire mansion, just across the river from the Eiffel Tower, in which the designer’s teams worked for 30 years. Highlights include the reception rooms formerly open to clients, more than 5,000 prototype dresses and the Studio – the nerve centre where all the collections were designed.
In mannequins and montages, original notes and sketches, videos and voice-overs, the museum charts the complete Saint Laurent story – from his first groundbreaking show in 1962, through to his designs for ballet and theatre, his fantastical costume jewellery, and his most iconic works including the era-defining “smoking” tuxedo. It’s an extraordinary visual narrative, and one which Saint Laurent himself had anticipated.
The designer’s prêt-à-porter collections are not part of the permanent displays, instead these will be featured over time in temporary exhibitions that will replace the permanent display for four months every year.

Yves Saint Laurent’s passion for painting led him and Pierre Bergé to assemble a truly incredible art collection. The couturier also expressed his admiration for painters through the various garments he designed to honor the artists he loved. Sending out clothing inspired by Andy Warhol, Van Gogh and Georges Braque in the ’60s and ’70s, his 1965 Mondrian collection is the most enduring collaboration: containing six shift dresses in homage to Piet Mondrian, the colourful designs punctuated the modernist spirit of an entire generation.
The international press was dazzled by Saint Laurent’s moving works of art. Diana Vreeland raved about them in the New York Times, deeming this “the best collection,” while Women’s Wear Daily called Saint Laurent the “King of Paris.” 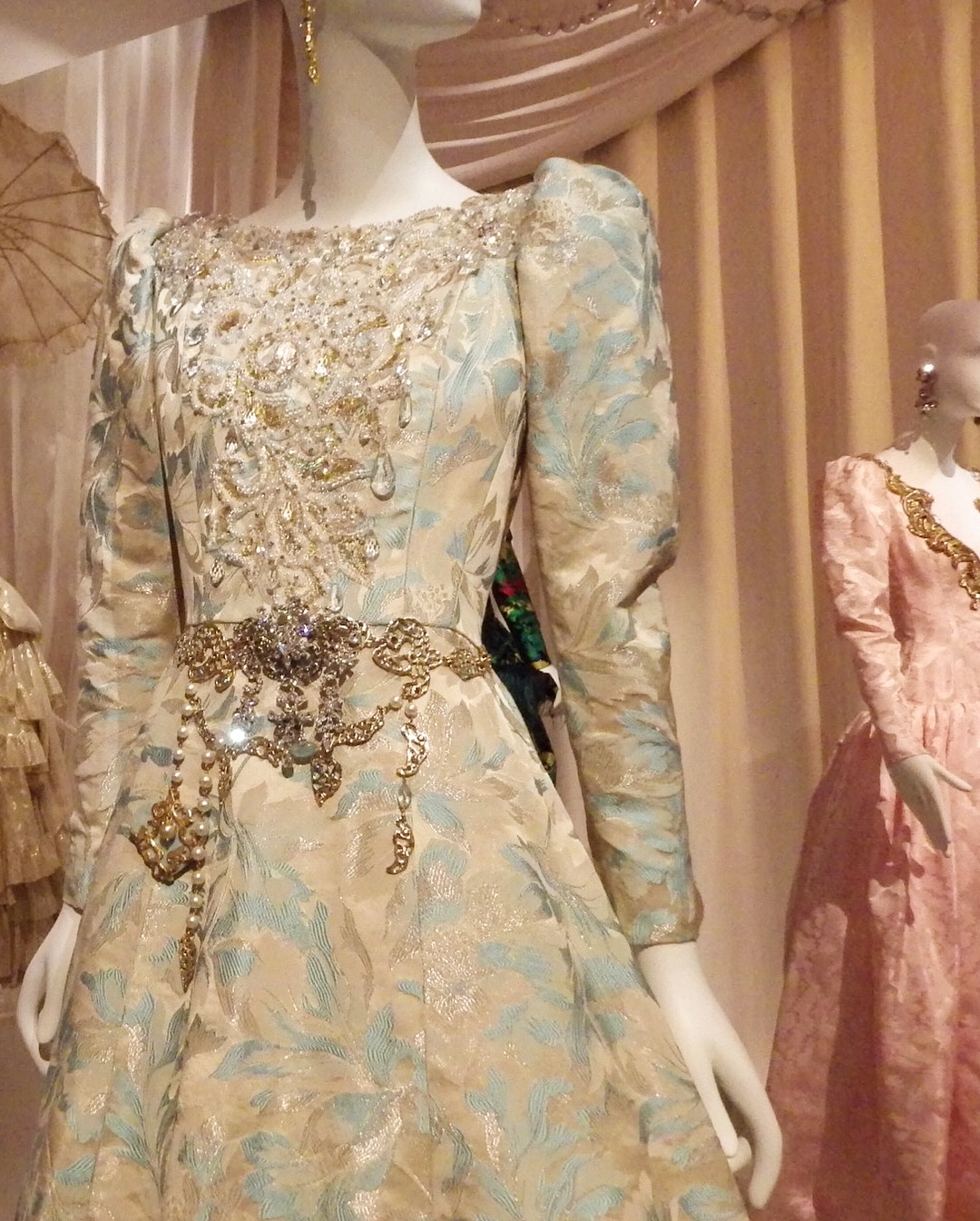 “The value of art lies in its power to increase our moral force or establish its heightening influence.”
– Odilon Redon

Open Tuesday to Sunday from 10am to 6pm.
Closed Mondays and public holidays.
Tickets offices close at 5pm.
Late opening until 9pm on Friday for temporary exhibitions.

Petit Palais was built along Grand Palais for the 1900 Universal Exhibition and became a museum in 1902. Designed by Charles Girault, it is based on a trapezium shape and is made up of four wings around a semi-circular garden bordered by a richly decorated peristyle. The architect achieved a successful blend of traditional and modern architecture which is evident in the natural flow of visitors around the building and in the bold openings he created onto the Champs-Elysées gardens and inner courtyard garden.

Petit Palais houses a significant collection of decorative murals and sculptures created between 1903 and 1925. The architect Charles Girault wanted to lend his building the grandeur and dignity of an official palace and created a programme of work designed to glorify the City of Paris and to celebrate the benefits of art.
The Petit Palais is inaugurated on 11 December as the “Palais des Beaux-Arts de la Ville de Paris”. It presents the collections of paintings and sculptures acquired by the City of Paris since 1870 either as commissions or bought directly from artists or at Salons. This ensemble of French art from the late 19th and early 20th centuries constitutes one of the major poles of today’s collection.

The second pole is formed by the collection of pre-modern art bequeathed in 1902 by the brothers Auguste and Eugène Dutuit, reflecting the 19th-century passion for European history and its curiosity about other civilisations. Their bequest includes an impressive number of ancient (Greek and Roman) works, art objects from the Middle Ages and Renaissance, Flemish and Dutch paintings from the 17th century, manuscripts and books from the 15th to 17th century, with 12,000 engravings, including complete sets of Rembrandt, Dürer and Callot, as well as Isalmic, Chinese, Japanese artworks.

My interest was particularly captured by the icons displayed in the Petit Palais as the finest French public collection of such items, a gift from Roger Cabal (1929-1997), an industrialist who was fascinated by the world of icons from a very young age. From this set of seventy-six icons spanning the period from the 8th to the 19th century, only one selection is on display.

The occasion for visiting Petit Palais was nevertheless its temporary exhibition The Art of Pastel from Degas to Redon of close to 150 pastels on display, offering an exhaustive overview of the main artistic currents of the second half of the 19th-century, from Impressionism to Symbolism.
The pastel technique, which is endlessly seductive due to the material itself and its colours, allowed artists to quickly produce works in a wide variety of styles. From simple coloured sketches to highly accomplished works of art, pastel is at the crossroads between drawing and painting.
The exhibition showcases the collection’s best paintings, including the works of Berthe Morisot, Auguste Renoir, Paul Gauguin, Mary Cassatt, and Edgar Degas; along with symbolist artists such as Lucien Levy-Dhurmer, Charles Leandre, Alphonse Osbert, Emile-Rene Menard, and a particularly remarkable collection of works by Odilon Redon; as well as society painters such as James Tissot, Jacques-Emile Blanche, Victor Prouve, and Pierre Carrier-Belleuse. 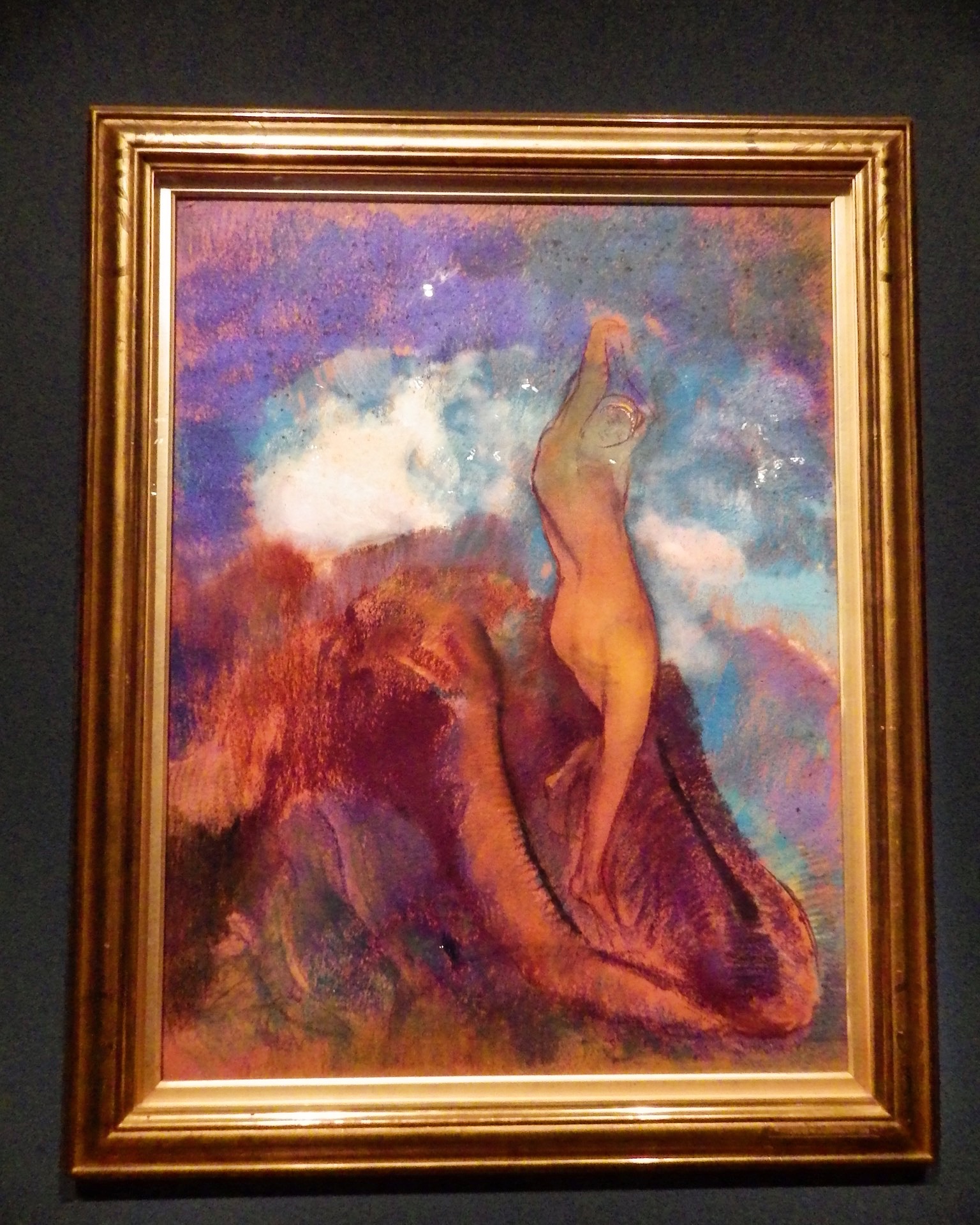 I was undoubtedly fascinated by Odilon Redon’s The Birth of Venus (1912). Odilon Redon was one of the outstanding artists of Symbolism, a multi-disciplinary arts movement, most active in the late nineteenth century. The Symbolist movement rejected naturalism and realism in favor of spirituality, the imagination and dreams. One related development during this time was the emergence of modern psychology. The work of psychiatrists Sigmund Freud and Carl Jung was particularly influential to the Symbolists, providing ground-breaking insights into the interpretation of imaginative and dream material.

Another fascinating detail I encountered during my pleasant visit at Petit Palais was the facial expression of an angel in The Ascension of Gustave Doré, oil on canvas of immaculate grandeur. In the Christian tradition, the Ascension of Christ concludes Jesus’ work on earth with his entry into the celestial sphere after his crucifixion and resurrection. Doré depicts Christ, in glory but still human, with wide open arms and surrounded by a multitude of angels gesticulating theatrically. Nothing impressed me more than the expression of grandeur and divine elegance of a black haired angel depicted in the lower right corner of the majestic painting.

“Sometimes all you need is macaroons, tea and oversized sweaters.”
– Gossip Girl Quotes

The highlight of a fascinating week spent in Paris was having the most flattering raspberry macaron ever – the prestigious Isfahan dessert – while sipping Fleur d’Oranger Tea in one of the most wonderful places I have ever been – Ladurée Tea Salon On Champs Elysees, just right after visiting Petit Palais for The Art of Pastel from Degas to Redon exhibition.

Established in 1862 by Louis Ernest Ladurée, this tearoom opened in 1997 at number 75 of the most beautiful Parisian avenue. With a Napoleon the Third decorating, the place mix antique marble, period friezes, valuable furniture amonch which a terrific bookcase. For lunch or tea-party, you wil enjoy a fabulous feast, cosily sat round the fireplace.
Laduree never fails to surprise by expertly combining salty and sugary flavours. Starters are salted “remixes” of the famous Laduree’s pastries : a vegetable St Honoré, a scottish smoked salmon “éclair”, or a duck “foie gras” enriched with an Earl Grey Tea macaroon. Main dishes are just as much surprising. From the menu, you will be recommended a sugared – almond breast of chicken or a thinly sliced duck fillet with raspberries. Finally, for those who have a sweet tooth, the frequently reinvented desserts will be up to your expectations. To accompany your tea, you will have to choose between a cream puff pastry filled in with rose cream, a rose and raspberry St Honoré, a liquorice millefeuille or unless you simply opt for one among the numerous flavours of the famous Ladurée’s macaroon.

Speaking of the famous macaroons, my absolute favorite is the Ispahan Dessert! Ispahan is the name of a rose, also known as ‘Rose d’Ispahan’ and ‘Pompon des Princes’ – a clear pink, half-open kind of Damask rose, although it doesn’t look the traditional red ones whose petals grace the dessert. Pierre Hermé came up first with the flavor combination when he was quite young – he produced an early version of the Ispahan for Ladurée – and it appears to be one of his favorites.
The Ispahan cake is a subtle blend of rose petal cream, soft and smooth, and lychee whose flavor enhances the rose and embellished with fresh raspberries of a contrasting acidity and power—all within a soft yet crunchy macaron envelope.

It was in Ladurée’s Tea Salon On Champs Elysees where I have discovered the delicate aroma of the Fleur d’Oranger Tea – a mesmerizing floral gourmet flavor which will add a touch of charm and grace to any day through the Orange Blossom infused Chinese Oolong Tea. Delicious is an understatement – it is rather sublime! By the way, it is available in only one store in Paris – Ladurée Paris Thé&Beauté  – a boutique exclusively dedicated to tea and home fragrances opened in the heart of Paris: 232, rue Rivoli 75001 Paris. Talking about exclusivity.

“A walk about Paris will provide lessons in history, beauty, and in the point of Life.”
– Thomas Jefferson 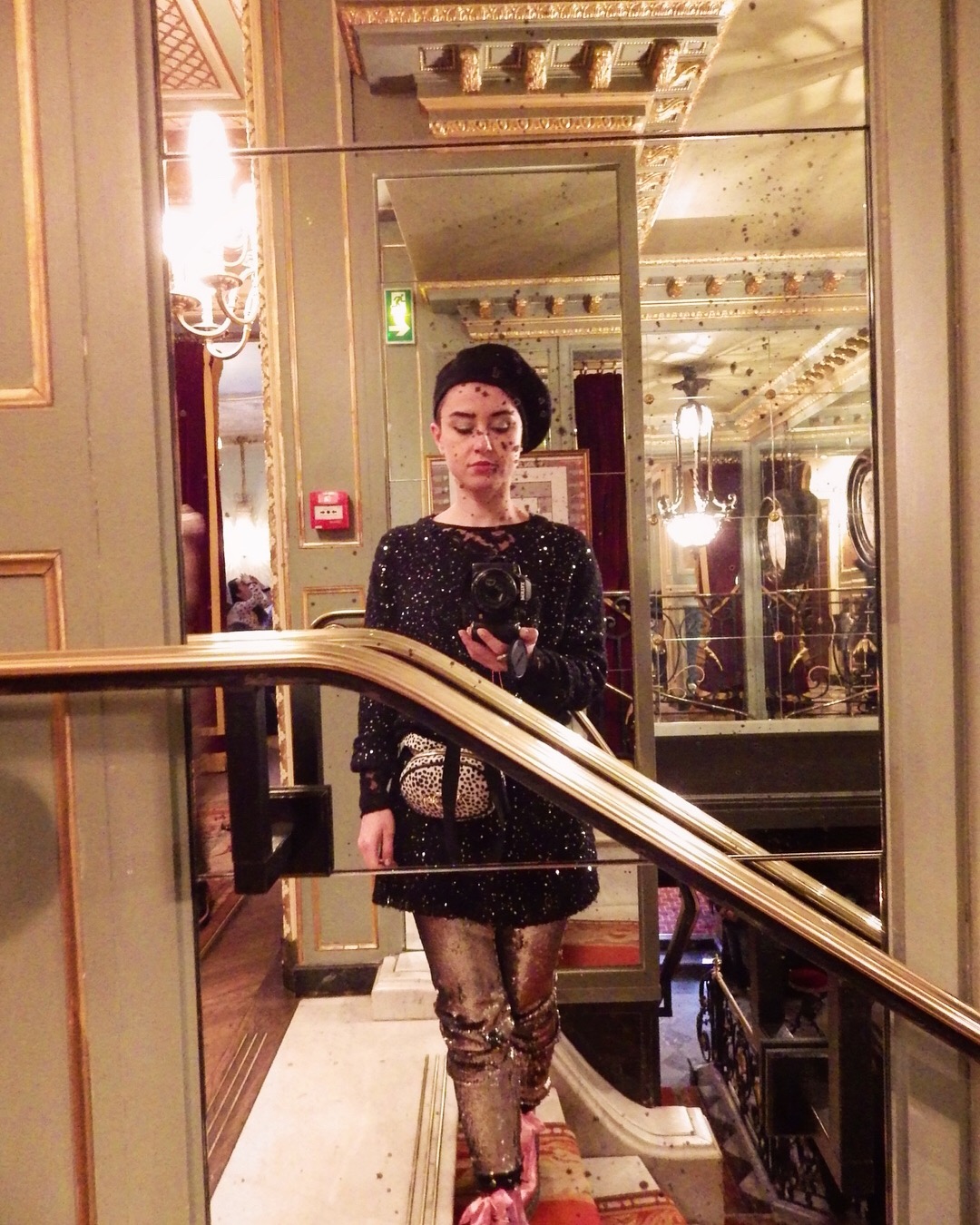 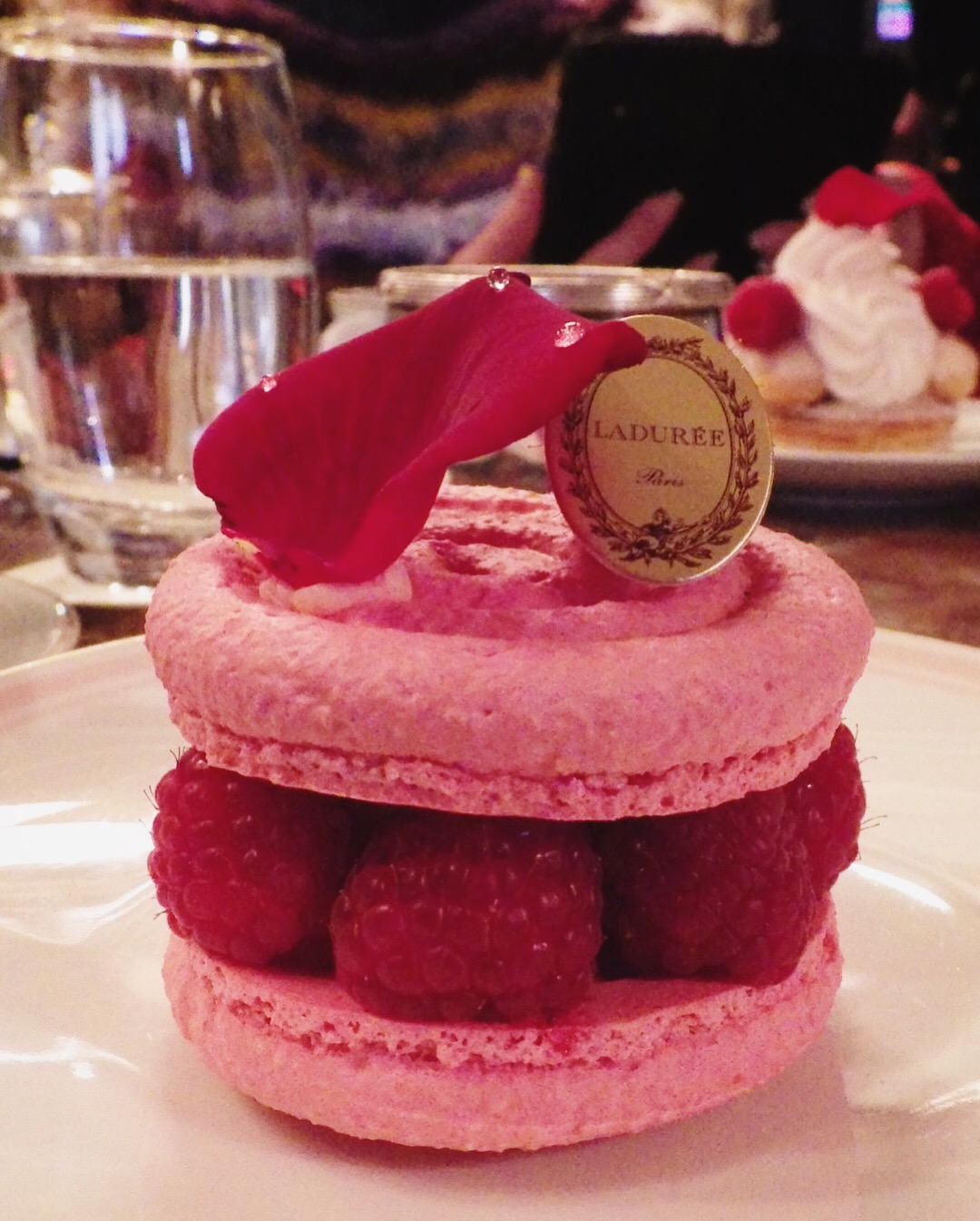 One response to “Royal Endeavors – Pretty in Paris”