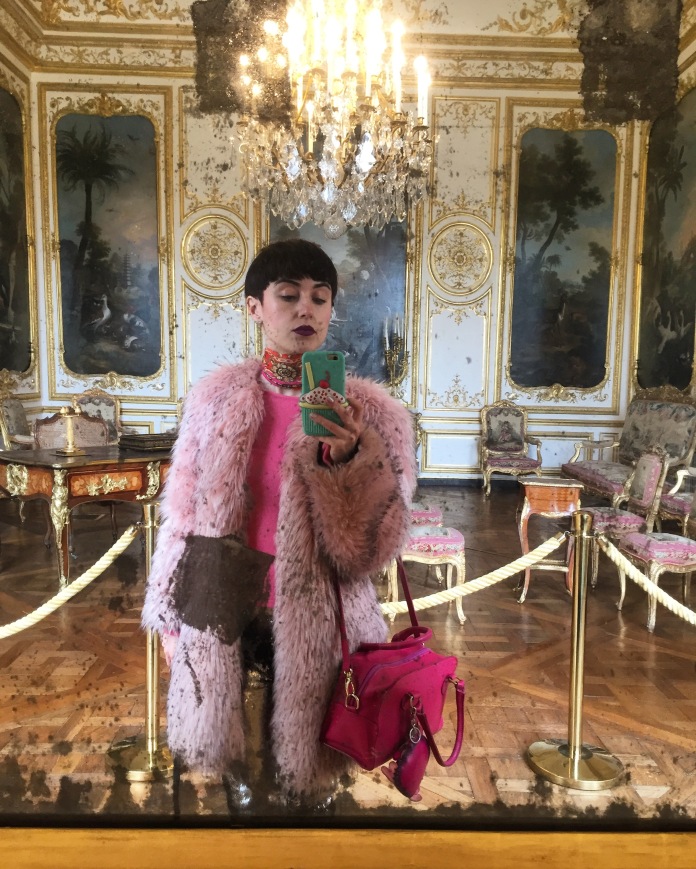 Pour moi, ça va trés bien! 👑🥇💃🏻
Enchanted by the Romantic Bliss of Spring Time in Bucharest, I am now gracefully equipped with an adequate mood and proper frame of mind to deliver the last part of the charming Trilogy featuring Your Serene Highness, QueenP, in the absolutely fabulous Chateau de Chantilly. 🏰🌹🏰
I had the undisputed pleasure to visit this Pearl of French Renaissance on a rainy Sunday FunDay with my Aunt D. on the 5rd of March.
According to Numerology, the 5 is extremely independent in mind and soul and surprisingly loyal. Given I was born on the 23 (2+3=5 – lol, I bet you know that better than me) of May (5th month of the year, of course), please be informed of my lifelong interest in Love, Light and Beauty, sublime traits which nurture my very Core and my infinite Dedication to God – which I would like to resemble more in terms of Moral Quality and Divine Grace than with any human. 🌟🌟🌟🌟🌟
That’s what so “different” about me – my standards – my aim to Perfection, which is a trait that the Chosen Few can achieve. Feel the Call haha. It’s called Destiny. 👁👁👁
We might sometimes lose the way with earthly distractions but I now choose not to. 🏆🏆🏆
I actually wanted to go wild in Paris by myself on that Sunday, but Aunt D. had the brilliant idea to invite me to the very place the Chantilly whipped-cream became a legend yuuuuuummm.
Such a Godly Creation deserves a good praise and I am thankful it was invented by Royals to entertain their guests with refined luxurious experiences and distinguished Art. 🥂🌹🍓🍦🍓🌹🥂

Let’s first indulge deep into our senses and embark on an adventure through a little bit of History and a lot of Beauty involved! 🕊🕊🕊
The Chateau de Chantilly is one of the finest jewels in the crown of France’s cultural heritage. It is also the work of a man with an extraordinary destiny: Henri d’Orléans, Duke of Aumale (1822-1897), a charming gentleman, the fifth son of Queen Marie-Amélie and King Louis-Philippe, the last King of France. Thanks to the precautions taken by the Duke of Aumale in his will, Chantilly remains, more than a century later, a showcase of preserved works where the charm of the 19th century continues to reign. 👑👑👑

In 1830, the Duke of Aumale, aged eight, inherited the Domain of Chantilly and a huge fortune from his godfather Louis-Henri-Joseph de Bourbon, the last Prince of Condé.
He thus became one of the most significant landowners in France and was constantly paying tribute to his ancestors and predecessors throughout his life. 🍀🍀🍀🍀
Considered as the greatest collector of his time, the Duke of Aumale, assisted by skilled advisors, built up a fabulous collection of precious books, paintings and decorative art objects, which he planned enhanced the family domain with. 🌟🌟🌟🌟🌟
After a political and military career, with no direct living descendants, he bequeathed the Domain of Chantilly and his precious collections in 1886 to the Institut de France, on condition that on his death, the Condé museum be opened to the public, that its layout be preserved and that the collections may not be loaned. 🏰🌹🏰

The primary pic depicts Yours Truly, fooling around with a mirror selfie in the breathtaking decor of The Prince’s Bedroom, one of the Lavishly furnished and ornately decorated princely suites, which makes the entrance to the Prince of Condé’s large suites. Fabulous! 👏🏼👏🏼👏🏼
With its décor of white and gold panels, it is typical of the Regency period. The woodwork is by architect Jean Aubert c. 1720 for the 7th Prince of Condé (1692-1740), minister of King Louis XV. 🇫🇷🇫🇷🇫🇷
The original furniture was unfortunately dispersed during the Revolution and the Prince’s bedroom thus lost its four-poster bed.
But who needs a bed, when I’m perfectly fit the for the White & Gold Extravaganza with a touch of Velvet Pink!💥💥💥

What I was wearing, you wonder? 💃🏻👁💃🏻
Marvelous – nothing but a Hottie and Naughty Pink Zara Fur shading a Raspberry Cashmere Isaac Mizrahi Sweater, PNK Casual silver sequin leggings – legendary – and my Gold Dr. Martens, of course.💄💄💄
Fully equipped for the main course.
GODMN. You’re welcome! 💋💋💋
A Royal Catwalk through Art!
I enjoy being in wonderful places, it shows. 💜💜💜

Be seduced by my Charming Immortalized Appearance in The Gallery of Battles, the most spacious room in the large suites, which was used as a reception room for the Princes of Condé.
It was decorated at the end of the 17th century for Louis II of Bourbon-Condé, known as the Grand Condé, by Jules-Hardouin Mansart, principal architect to King Louis XIV.
The Gallery of Battles exhibits a series of eleven paintings illustrating the main military victories of the Grand Condé in chronological order and Princessa Petra on a Casual Sunday lol. 🌹🌹🌹

The Large Corner Room deserves a Deep Praise – it was the Prince of Condé’s office and it is there in this sublime bliss that he held audiences. 🤴🏻🤴🏻🤴🏻
It is decorated with white and gold woodwork dating from 1720 and adorned with hunting motifs. Divine! The neoclassical seats and chairs belonged to King Louis-Philippe, the Duke of Aumale’s father. Fit for a Queen. 👑👑👑
My imagination went wild, fascinated by the absolute adoration the Prince of Condé had for Beauty, Grace and Style. Impeccable tastes. 💍💍💍
Such a well preserved Art collection and such a well deserved Quality Time I had admiring his spectacular Legacy! 💜💜💜

The Duke of Aumale devoted his entire life to his two passions: his love of books and fine art – which I would personally consider a Dream Life – so inspiring!
In 1848 he started a remarkable collection of paintings, drawings and, above all, books. ✍🏼✍🏼✍🏼
In a letter to a friend he admits: “I think I’m suffering from bibliomania!”. The reading room was designed by architect Honoré Daumet at the end of the 19th century to house the Duke of Aumale’s rare book collection. 👀👀👀

Please be introduced The legacy of a passionate bibliophile, an exceptional book collection, which The Duke of Aumale had acquired from all over Europe, from booksellers and at auctions. The Duke was a wealthy, enlightened man and advised notably by Antonio Panizzi, the director of the British Library, and Léopold Delisle, the General Administrator of the National Library of France, he put together an exceptional collection of precious books and illuminated manuscripts, including some major works of medieval art. ✨✨✨✨✨

Of the 60,000 volumes contained in the Chantilly collection, almost 19,000 volumes are exhibited in the Reading Room, including 1,500 manuscripts and 17,500 printed documents on the subjects of universal knowledge. The manuscripts, the oldest of which dates from the 11th century, include 200 medieval manuscripts of which many are illuminated. The printed documents include approximately 300 incunables (pre-1501) and 2,500 books printed in the 16th century. 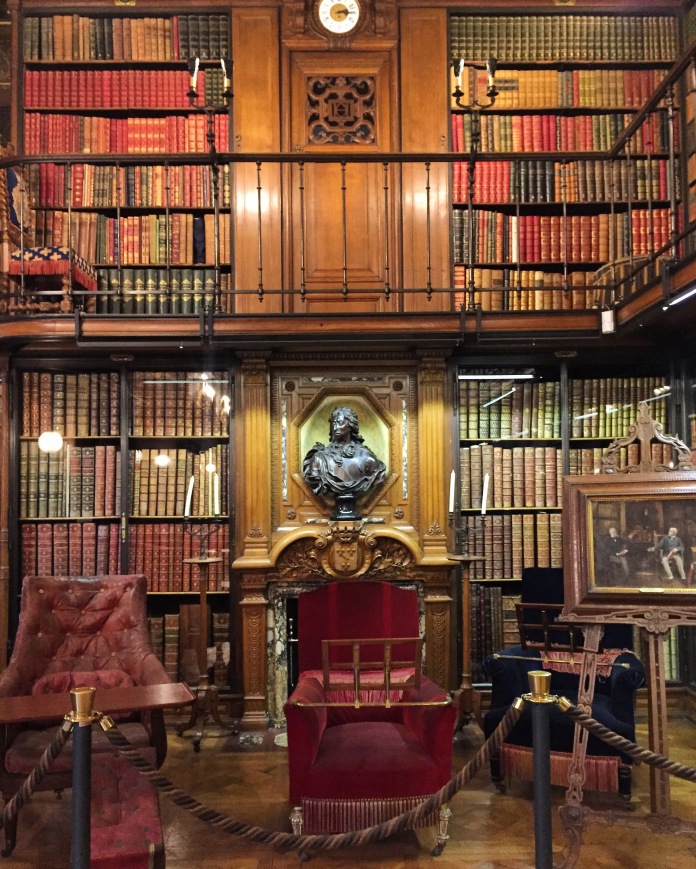 As a space for reading and working, the Reading Room was one of the Duke of Aumale’s favourite rooms, as demonstrated in a painting by Gabriel Ferrier depicting him at the end of his life compiling a catalogue of his manuscripts with his friend and former tutor, Cuvillier-Fleury, who assisted him in acquiring books. 🎨🎨🎨

Almost 1,500 manuscripts are kept in Chantilly, making it the second largest library in France for illuminated manuscripts after the National Library of France. 🏆🏆🏆
The Très Riches Heures of Jean, Duc de Berry is one of the most precious manuscripts in the library and archives of the Condé museum of Chantilly. It is reputed to be the most beautiful manuscript in the world and referred to as “The King of Manuscripts” by the Duke of Aumale. This is the most famous and most admired “treasure” of the Château de Chantilly’s collections. 🎯🎯🎯
This book of hours, commissioned by Duke John I of Berry from the Limburg brothers in the 15th century, was acquired by the Duke of Aumale in 1856.
For conservation reasons, the original manuscript cannot be viewed, visitors are invited to discover it in a facsimile and in a digital version that can be accessed freely and provides views of all the pages of the manuscript. 💎💎💎

Let’s turn around and return to the page where I touch down the divine ground of absolute Joy and Genuine Pleasure produced by Art visualization. I am Thankful to God for the divine inspiration the charming Prince had to invest his Passion, Time and Dedication in acquiring such a Refined evidence of Art and Beauty. 🌹🌹🌹
I’ve heard a rumor you may last into Eternity through the Object of your Creation therefore I now consider Chateau de Chantilly to be the absolute proof of that. 🗝🗝🗝
The Duke of Aumale designed the art galleries to showcase his exceptional collections. He put together the second largest collection of antique paintings in France, after the Louvre Museum. 💌💌💌

The Gallery of Painting is the heart of the Condé Museum. It provides an exceptional example of 19th century museography: paintings are laid out at several levels, frame by frame according to format, with no chronological order. 🎊🎊🎊
In all, 85 paintings including Philippe de Champaigne’s Portrait of Richelieu are exhibited according to the Duke of Aumale’s personal taste. At the far end of the gallery, masterpieces of the Italian Renaissance are exhibited in the Rotunda, including Piero di Cosimo’s portrait of Simonetta Vespucci. 🎏🎏🎏
In keeping with the Duke of Aumale’s wishes, the layout of the paintings remains unchanged since the 19th century, providing a unique possibility to travel back in time and discover the typical museography of the time. Sublime!

This picture portraits Perfection achieved on Poetic Levels of Fashion, Style and Grace – a Legacy of Touching Ground with Timeless Art – hanging out with my Royal Companions, Fanfaraut et Brillador, Le Duke d’Aumale favorite Dogs. Hunting with packs of dogs was a favorite activity of the French royalty. The Duke of Aumale adorned his chateau with statues of dogs to honor their devoted friendship and role in hunting. The statue is the work of Auguste Nicholas Caïn. Splendid! 💜💜💜

I could go on forever enchanting you with the creative blessings you could encounter in such an Art Sanctuary, the supreme Joy of discovering priceless timeless masterpieces no other Domain has to offer, which had deeply fascinated my View and Vision! 😇😇😇
This is what I would like to do in Life – surround myself by Endless Eternal Beauty! 🔮🔮🔮
I was astonished and overwhelmed by the offerings the devoted Heart the Duke of Aumale had – his legacy and religiosity inspired me! A Prince for The Princess. 👏🏼👏🏼👏🏼
I would like to adopt this successful attitude in Life, which is to invest myself through the Co-Creation of Divine Legacy and Spiritual Awareness, raising vibrations 5D Full HD through Love and Dedication to Beauty. 🌹🌹🌹
Sometimes I Ride Ponies in Le Carrousel de Lancelot at Disneyland like Ginuwine, other times I pose, hit and run like The Weeknd – I’m a Star Girl – it’s all fun. 🌟🌟🌟🌟🌟
The world needs beautiful People, beautiful Places, beautiful HeArts.
Make Yourself a Living Work of Art. 💅🏼💅🏼💅🏼
xoxo 💋💋💋